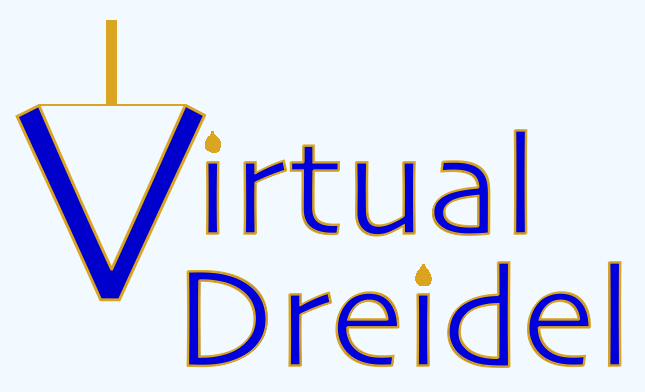 In a normal year, we'd celebrate Hanukkah by gathering together to light candles, eat latkes, and play dreidel. This year, we'll have to gather virtually instead. You can play Virtual Dreidel while you're on Zoom, a phone call, or a text group with your family and friends.

A dreidel is a spinning top with four Hebrew letters written on the sides – nun, gimel, hey, and shin (or pey if you're playing the Israeli version). These letters stand for nes gadol hayah sham, meaning "a great miracle happened there," referring to the miracle of a tiny drop of oil lasting for eight days!

To play Virtual Dreidel, each person begins with a pile of five pieces of gelt (gold coins that, in real life, are made of chocolate), and the pot in the middle will begin with four pieces of gelt. You'll go around in a circle taking turns spinning the dreidel, hoping to score more gelt for your pile.

When a player's gelt pile is empty and they're required to put a piece of gelt in the pot, they will be eliminated. The last player remaining is the winner! Mazel tov!

Thanks so much for playing Virtual Dreidel this year! We'll be back for Hanukkah 2022!

Thank you for your message. We will get back to you shortly.